Can’t you see the oneness of it all? The lonely specks of Diesel trucks a mile apart filing across the great Mojave — a hundred minds, a hundred miles, with a single purpose — parading on Highway 66, …

Guy Murchie, Song of the Sky

Ah oneness. Yes, I remember that oneness thing. A hundred diesel trucks in a row, all doing the same job, driving the same road. Same direction. No turnoffs. No stop signs. Only time and distance.

Those were the days.

Guy Murchie was a 20th Century science and technology writer, idea man, mystic, poet, and rambler. He was also a Bahá’í, which is why I’m more familiar with him than your average gen-xer. Humoring a surge of nostalgic curiosity, I’ve been reading Murchie like I never bothered to do as a Bahá’í youth, starting with Song of the Sky, his book on the atmosphere, flying, and navigation from back in 1954 that won the John Burroughs Medal.

This is a review of the first 125 (of 423) pages. I believe I’ve seen enough to get the gist of the book. I intend to move on to Murchie’s other major works, Music of the Spheres and The Seven Mysteries of Life. 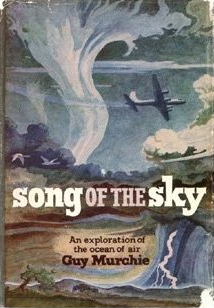 Song of the Sky jacket art

Overall, reading Song of the Sky serves to remind the reader of just what a special experience flight is. 55 years later, it’s easy for us to forget how wonderful a thing — and how novel — flight is. Guy Murchie strives to inspire the reader with a rambling survey of the history, science, technology, and myth of flight and the medium of flight, and he does a fairly good job of it.

Much of the general subject matter hasn’t changed too much in those 55 years. The book has not yet been antiquated by satellite positioning systems, space exploration, interstate highways, personal computers, cell phones, and cable television. Still, there’s sufficient misinformation and questionable reasoning to diminish the credibility of the book, and make it difficult for the reader to process assertions without doubting their veracity.

It’s not always easy to tell, after all this time, whether Murchie’s facts are obsolete or whether his facts were wrong from the beginning. Some rather florid prose and superfluous content also bog the reader down from time to time.

There are a few matters in the book’s chapter on the history of navigation that left me checking the facts.

Chapter Four: Ocean of the Sky

Murchie gets particularly extravagant in his effort to extol the greatness of the atmosphere by contrasting it with the land and sea. He begins by asserting that “in the sky you cannot stop: to stop is to die.” This makes perfect sense, though a shark might beg to argue that it has the same problem underwater. Murchie appears to realize that hot air balloons and insects don’t need propulsion systems to survive aloft, so he changes his logic to mean that one cannot stop because the air is always moving. Even that fact appears to be only partially true, for air masses can stagnate in the same manner that water bodies do. Murchie himself points out that air can stagnate later in the chapter, but conveniently forgets it in this discussion.

It is true that the sky is a dynamic medium, but then it is also true that much of that dynamism is driven by the solid earth’s rotation and differential heating.

Murchie then attempts to glorify the atmosphere by observing:

the last major exploratory goal of the earth to be gained was the summit of the highest mountain.

This is a peculiar argument, given that mountains are terrestrial phenomena, and though there maybe plenty of atmosphere around mountains, the atmosphere around them tends to be quite rare. As to the veracity of the argument, it was true in 1954, a year after the summit of Everest was first gained by Hillary and Norgay, but — predictably — it has been rendered false by the passage of time. For instance, the first nuclear submarine — capable of remaining submerged almost indefinitely — was launched a year later. The frontiers of the ocean and earth remain largely unexplored to this day, whereas the highest mountains have all been conquered, many of them frequented by the footsteps of casual “weekend warriors”.

Murchie continues his assault on land and sea by asserting the superiority of the atmosphere as a source of metaphors and edification, arguing that the lessons of the earth and sea are “too rare for practical learning”, and the “gentle betweentime lessons” of the earth “do not compare with the drama of the heavens where mountains burst out of sweeping cloud oceans …” Again, Murchie makes the mistake of employing mountains as champions of the sky, but adds the metaphor “oceans of sky”, as if to make the point that the sky cannot be described without reference to land or sea.

As if all that weren’t enough, Murchie seems to think that “some physicists” had determined that volcano-generated waves (which we now call “tsunamis”) are generated by wind action. I doubt that any physicists ever believed such a thing, but they certainly don’t today.

There are assertions that Murchie makes that seem very doubtful, that I am not prepared to disprove. Here’s a good example:

Although air has been “duplicated” chemically in a laboratory retort, no one so far has been able to make sky life grow in artificial air until at least a tiny portion of natural air was added.

I’m not clear on what Murchie is reporting in this passage. Is he claiming that airborne microbes cannot grow in synthetic gaseous environments, and that “natural air” has some special nutritive mystery stuff on which microbes feed, or some kind of vital force, an elan vital? Whatever it is, he calls it a magic touch. I suppose I’ll have to read The Seven Mysteries of Life to get some clarity on that. Part of what puzzles me is that I’ve heard that Murchie believed that life is ubiquitous, such that even rocks are alive. If he really believed that, why would he need to postulate a means for life to arise from dead matter?

Murchie goes on to claim that there is no up or down in the sky, and that gyroscopes are employed to inform pilots which way is up and which way is down. This is not really true. The fact is that up and down are quite distinct in the sky. It is only when bodies are accelerated that that sense of up and down is confused. This confusion doesn’t just happen in the sky. It also occurs in automobiles, spacecraft, and freefall.

The jacket blurb for Song of the Sky includes the following passage:

If some of the facts here presented seem fanciful, it is because nature aloft as Mr. Murchie found it does not conform to standard textbooks. Yet his work checks with the pioneers who are gathering the amazing new material that will be the foundation of the textbooks of the future.

I would not want to go so far as to describe the book’s factual claims as fanciful. There is much good information in it, but unfortunately, there is enough misinformation and Victorian flourishes to jeopardize the usefulness of the book. It’s a sad thing to see an award-winning book no longer in print, but the cold fact of the matter is that it doesn’t have a place on today’s science bookshelf.

Still, I think I’ll keep it on my bookshelf. I hope to finish it some day. In the nearer term, I hope to find that Murchie redeemed himself as an author with his later works.

3 comments on “Back to the Future”