Today — the 9th day of the 9th month of the 9th year of the New Millennium — must be a very special day. Any world cataclysms on the agenda?

Just curious. I don’t want to give anybody any ideas.

One day — maybe today — the people of the world will tire of the impotence of the established system that runs the world. It is inevitable. The state of world economies and politics will deteriorate, and the world will descend into a great catastrophe; perhaps a war or a worldwide economic collapse, forcing the people of the world to recognize the intrinsic superiority of God’s Administrative Order, and suddenly reject the world establishment and turn to us.

This revolutionary, utopian vision is the outlook that I inherited as a Baha’i child. It sounds remarkably similar to a Marxist outlook, only it adds God to the formula. We called this the day of “entry by troops.” The “troops” are the Bahá’í equivalent of the “workers of the world.”

A year ago, an international financial crisis caused the leadership of the Bahá’í Administrative Order to prepare for the long-anticipated catastrophe and call for great conferences around the world to prepare Baha’i communities for entry by troops. When I was a kid, I would have been surprised to find that it would take the world so long to recognize the superiority of our World Order. We expected something very big to happen by the year 2000, and probably well before that. Since then, The Bahá’í eschatological schedule has slipped, insurance policies extended, and mortgages refinanced, but the general outlook hasn’t changed. Some appear to expect something big to happen in the year 2012. 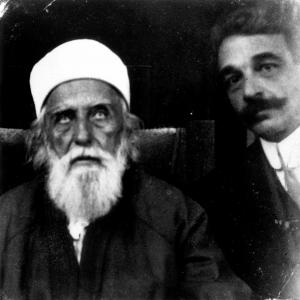 The Master, praying for patience as an American follower tries to get his brown nose into the shot.

After all, that would be exactly 100 years since “the Master” came to America, and you know what the Mayans say about 2012.

The Administrative Order is the embodiment of the unity of God, unity incompatible with the existence of factions.

Actually, I doctored that citation a little. The original passage reads as follows:

The Party [is] the embodiment of unity of will, unity incompatible with the existence of factions.

The Bahá’í Adminsitrative Order even has multi-year plans, you know, like the plans Stalin adored so much!

Anyway, it’s all about unity. And bureaucracy. Put them together and you have “the Party,” or as Bahá’ís say, “the Cause.” As I recently pointed out, the Bahá’í Faith is so bureaucratic, what they call “feasts” are actually committee meetings.

It being crucial that Bahá’ís know exactly what words to use when approached by the “troops”, a massive re-education program — code-named RUHI — has been initiated, and has been proceeding for 13 years now, in anticipation of that great day, expected sometime in the next dozen years. It is known to be a very simple program, tuned to focus on basic talking points of administrative doctrine.

I have lots more to say on this, but I need to post before civilization implodes. Now, where’d I put those boots?