With the great Iranian harvest festival approaching, I’ve got food on my mind.

Okay. I often have food on my mind.

But I’m not alone. Zoroastrians are religious about food, and who can blame them? There are, by name at least, seventeen feast days on the Zoroastrian calendar. Eight of these feasts are observed religiously. Imagine having eight Thanksgivings throughout the year! 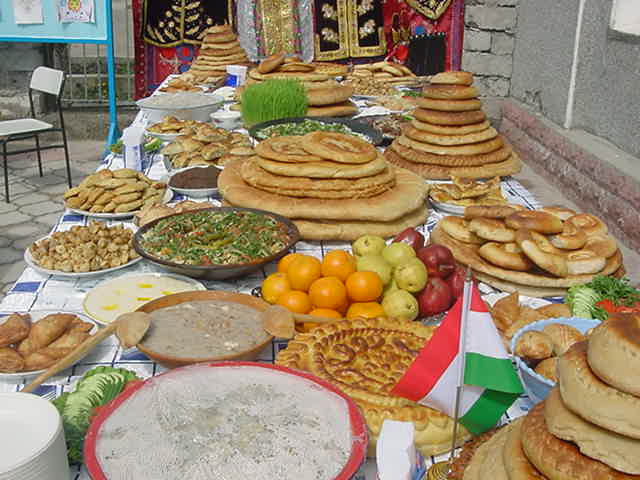 A Tajik No Rooz feast

And no, they don’t fast.

After the harvest feast of September comes Mehregan, a particularly significant feast. It is also a harvest feast, by virtue of its placement on the second day of October. It is the Feast of Mehr, or Mithra. Mehr represents two things in the Iranian mind: ethically, faithfulness to contracts, and symbolically, the sun. Thinking of the crucial role the sun plays in the harvest, and thinking of agriculture as a crucial contract with the earth, one can easily see that Mehr is as good a celestial power as any to be recognized at the onset of Autumn.

Not to suggest that there aren’t other good times to throw a feast. The ancient Iranians also had a Spring feast, a feast for the rains, a Summer feast, a round-up feast (yes, like the cowboys have), a Winter fire feast, and an “All Souls Feast” at the year’s end.

Each Zoroastrian congregation celebrated these festivals by attending religious services early in the day, devoted always to Ahura Mazda, and then by gathering in joyful assemblies, with feasts at which food was eaten communally which had been blessed at the services. Rich and poor met together on these occasions, which were times of general goodwill, when quarrels were made up and friendships renewed and strengthened.

As I have mentioned more than once before, I was raised in an Iranian religion that has little regard for its pre-Islamic Iranian heritage. I never heard of these feasts as a Bahá’í. If my family had a feast day, that was Thanksgiving. I really liked Thanksgiving. Turkey Day was right up there with Halloween and Independence Day. Thanksgiving was one of those Western holidays that we were free to observe because of its lack of any strong ties to Christianity. It would have been a slippery slope. It seems harmless enough to have a Christmas dinner, but next thing you know you’re fasting for Ramadan. You have to nip these things in the bud!

I attended my first Zoroastrian New Year’s (No Rooz) celebration last Spring, and I’ve been meaning to write something down about what a pleasant experience it was. I went to the fire temple first, with no real intention of joining the festivities in the community hall. I enjoy the fire temple, and I’d go much more often if it were in a more convenient location. It’s a quiet, casual experience. One is expected to remove one’s shoes and wear a cap, but that’s not much to ask. I wouldn’t be comfortable tracking dirt in there anyway, and though the cap is a bit formal for my general liking, it gives me a comfortable sense of—how should I put it—spiritual discipline.

As for the festivities, well, I’m hesitant to jump into the fray with a lot of Iranian strangers (and thus they’ve remained strangers over the years), but once invited, I generally enjoy myself. And what’s not to like? Good food, song, dance, and conversation.

Someone’s bound to point out that Bahá’ís do have observances which they call “feasts”. The Bahá’í Calendar features nineteen meetings which they call “Nineteen Day Feasts.” These Bahá’í “feasts” may have been originally inspired by Iranian culture, but they have little in common with Zoroastrian feasts, or any other traditional feast, for that matter: Bahá’í “feasts” are not really feasts at all.

The 19-day Feast is administrative in function …

Shoghi Effendi, Directives from the Guardian

The Zoroastrian feasts are quite literally feasts; traditionally an opportunity for the fortunate to share the bounty of their good fortune with the less fortunate. The Bahá’í feast, though it generally involves food, is more often described as a feast of spiritual sustenance — in a distinctively administrative sense so characteristic of Bahá’í practice.